Worldwide, over 70 million people are fleeing persecution, oppression and threats to life and limb. Only a small proportion of them reach Europe. For those whose journey ends in Switzerland the fogginess of the asylum procedure begins. The Swiss Refugee Council SRC – a politically non-partisan and denominational independent non-profit organization – accompanies asylum seekers through the jungle of the Swiss legal system. It was for us a special honor to produce an audiovisual tool that helps asylum seekers to understand the Swiss asylum procedure.

We used a feature like film style to convey the information in a calm and beautiful way. The film tells the story of a newly arrived refugee going through the asylum process. The film is a fiction portraying the ideal asylum procedure. A voice-over follows our main character and tells the audience (the asylum seekers) the different steps that are in front of them. The film has been produced in 20 different language versions!

This project was a beautiful challenge. But before I tell you some anecdotes, watch this trailer (for now the full film is only available inside Swiss asylum centers):

Filming inside the asylum center

During 5 days we were allowed to film in the asylum center at Morillonstrasse in Bern, accompanied by a critical and curious gaze of inhabitants and security personal. That is a rather short span of time, for an 18 minutes long film. Preparing every shot in advance helped us to keep the schedule.

For us, the film team, the atmosphere was rather out of the ordinary. But for our main actor, Awara Khdir, who performed beautifully in front of the camera, the situation was very familiar. After the assassination of his father by jihadists and further threats to the family, his family fled Iraq. His story gave the production greater depth: In front of the camera, he used his own story to answer questions from the fictional employees working for the State Secretariat for Migration. His background helped the other characters to stay in their role. Awara is an example of an immigration process gone well: he is a professional translator with ambitions to become a professional actor. 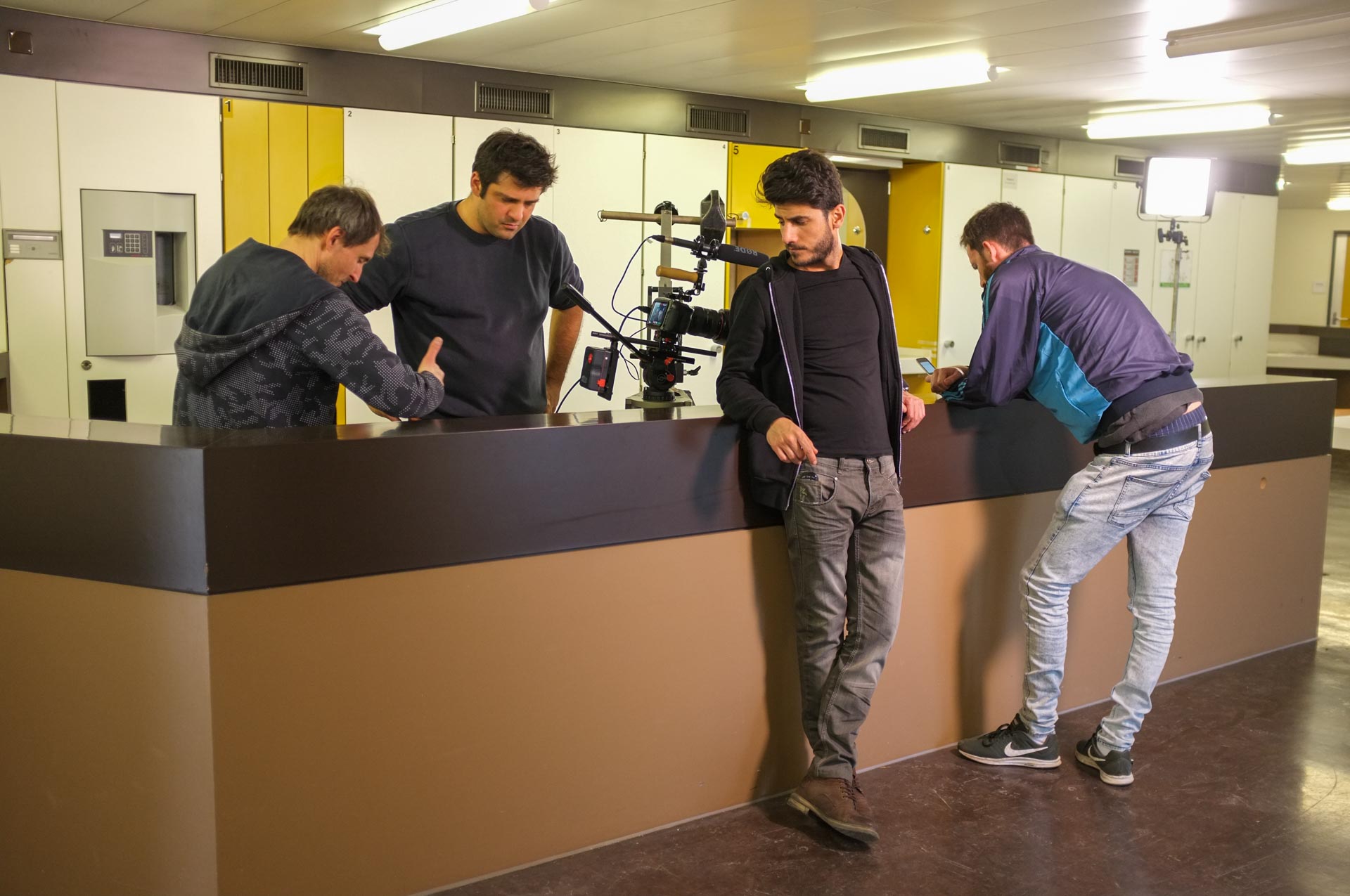 We heard that also some of the security personnel are thinking of an actor career after seeing themselves in our film. I am sure this is due to the excellent work of our cameraman Alex Favarger and his right hand Caroline Wagschal, who were constantly hunting for the best camera angle and perfect lighting. 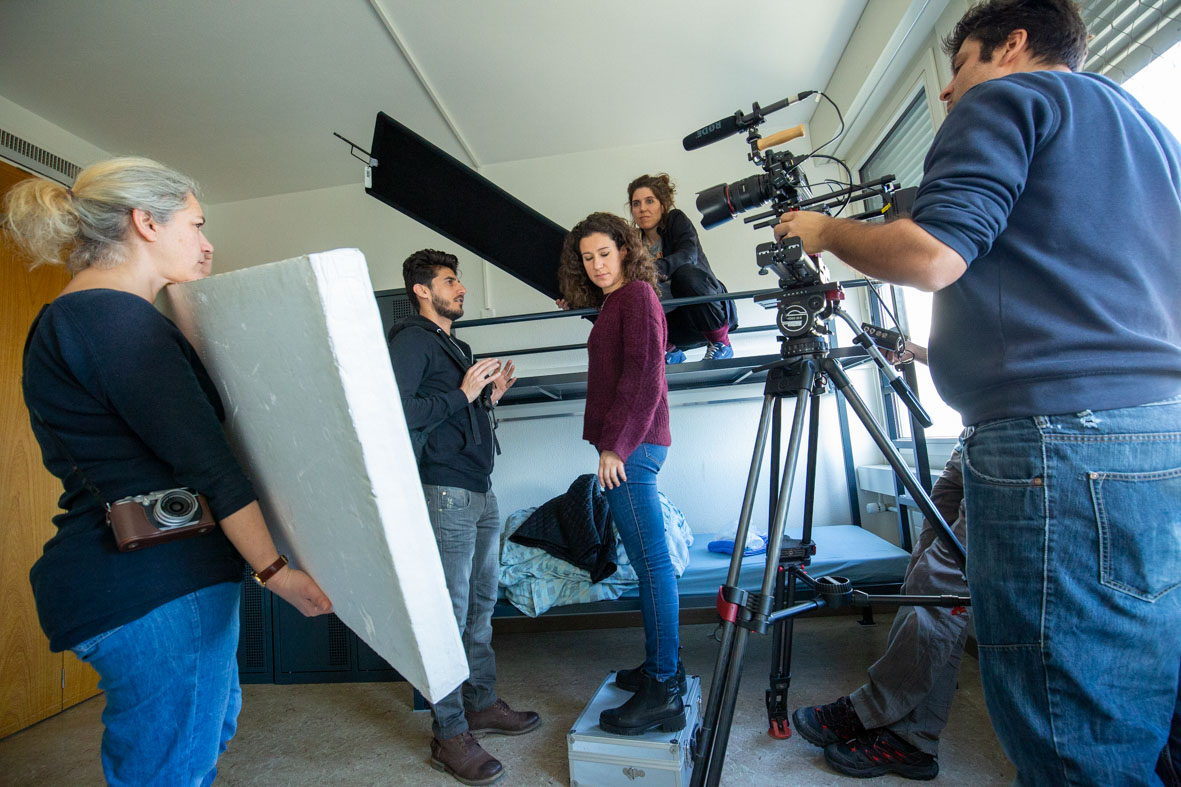 Recoring the voices - Or: Did you know that they read Nietzsche in Somalia?

An information film needs to be well understood by the target audience. This meant to record not less than 20 different languages for refugees arriving to Switzerland from around the world: Dari, Farsi, Tibetan, Mandinka, Sorani, Somali, Kurmanji Georgian, Tigrinya… to name a few.

I made a point tow work with people with a migration background. This was important to me. I wanted to show how rich Switzerland is, having accepted them as citizens. On a practical side, it is impossible to find professional voices in Switzerland for all these languages. And I like working with people that are present in the studio.

But how to find them? To find our voices, we had to use all possible connections – friends working in asylum centers, the Tibetan Shop around the corner, Facebook forums. Myriads of phone calls, messages, and personal meetings to narrow our list down to those that posses a natural talent behind the microphone.

Sometimes the people that entered the recording studio at Radio Vostok in Geneva confronted us with our own prejudice. After recording the Somali voice, 20-year old Said, wanted to know the best bookshops in town. It has been the first time he was in Geneva, and he wanted to make the most out of it: Find a book store that sells writings by Nietzsche translated into English. “You mean: Friedrich Nietzsche, the german philosopher?” I asked. “Yeah, of course! I love him! But it was hard to get his books in Somalia.”, he answered and started to sms me quotes from “Human, All too Human”. I was stumped.

Ahmad Rayan another incredible male voice and a death metal fan fled Syria in 2014. He is a great painter and multi-media artist and is finishing his Master in Fine Arts at the University of the Arts in Bern. 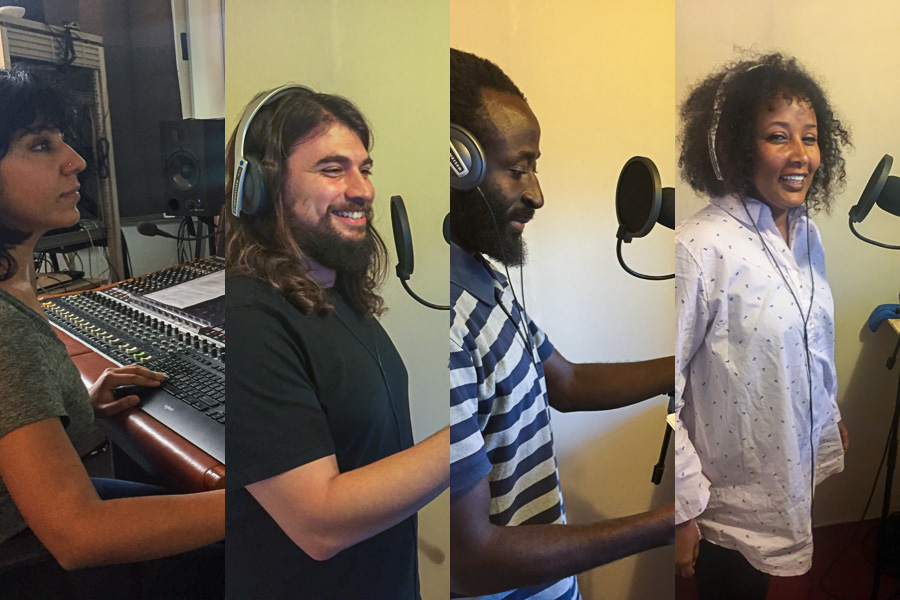 Finally, when all our speakers found their way to our studio in Geneva we were confronted with a bunch of unforeseen difficulties: Is this Tibetan woman mumbling and swallowing vowels - or does this language really sound like this? Why is this sentence in Kurmanji suddenly three times longer than the English one? What to do when your speakers tell you that the translated text makes no sense to them? How to proof-check languages that have no written grammar? And: how to translate words for things that do not even exist in other countries, like “Wiedererwägungsgesuch»?

In this challenging process we learned: the complexity of the act of translation cannot be overstated. Often we forget that a language is not merely a collection of words and of rules of grammar and syntax to generate sentences, but also a vast interconnecting system of connotations and cultural references. Our language and speech habits determine our perceptions, our words and our worldviews are deeply connected. 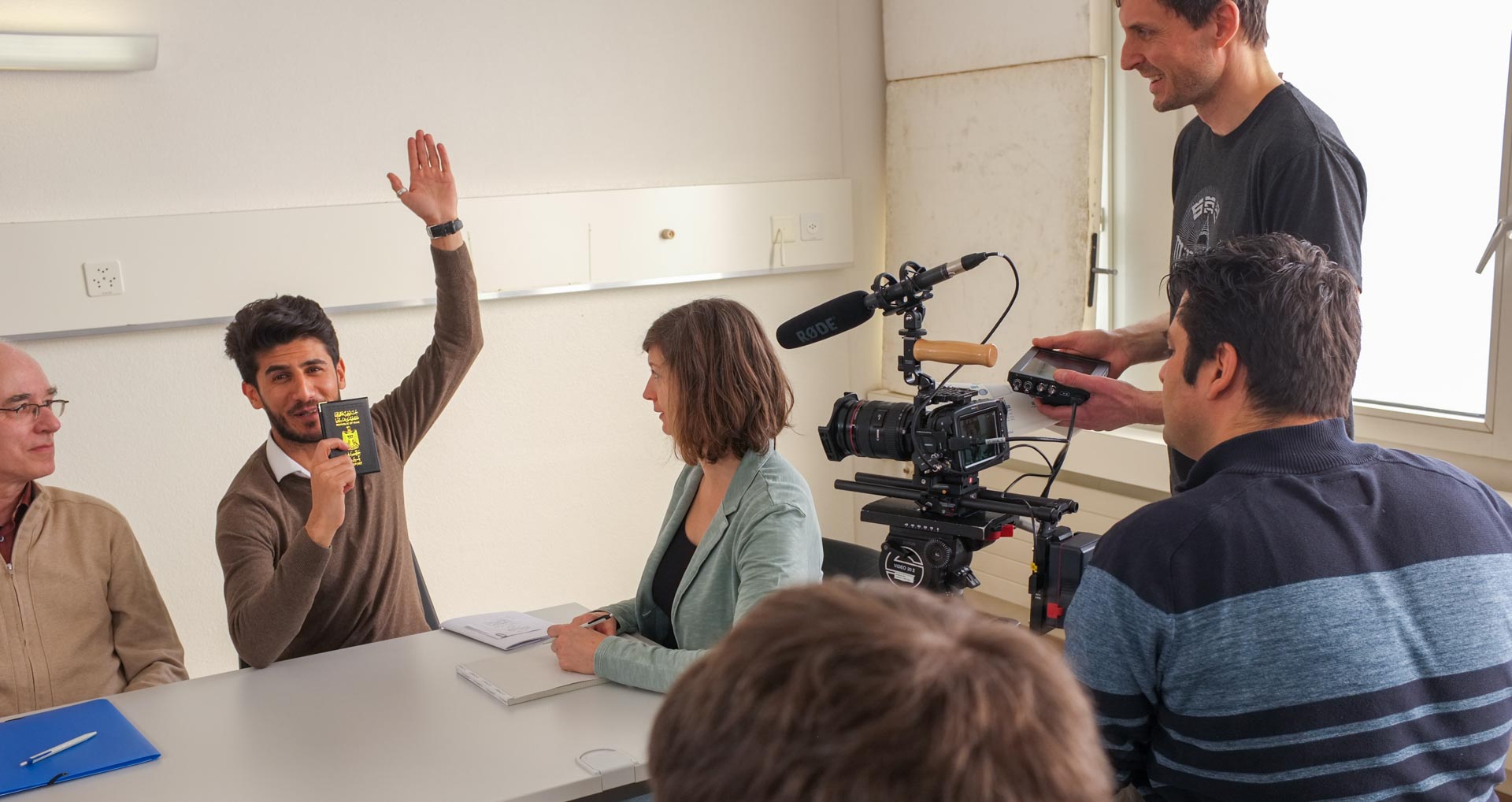 «Übersetzen ist das falsche Wort für eine Sache, die es nicht gibt», as Oskar Pastior, a Roma-German poet and translator once stated. A translation in the broadest sense of translatio (which comes from trans "across" + ferre "to carry" or "to bring")  is the process of transferring or carrying something over from one thing to another; it’s a ferry from one bank to another, never sure if it will reach it’s goal.

Nevertheless: We hope our film will help people to arrive and orientate in our country's asylum procedure. They can watch the film on large touchscreens in the asylum centers they are staying in and waiting for the final outcome of their petition.