In Feb 2020 dubbed perception found a new base. The 'Bahnstrasse 44' project in Bern creates around 2500 m² of living, working and action space for creatives from a wide range of sectors and disciplines, from art and music to text, architecture, hacking, design, coding, film and photography, to graphics, illustration, publications and events. A perfect home for us who love to be inspired by and collaborate with other creative people! 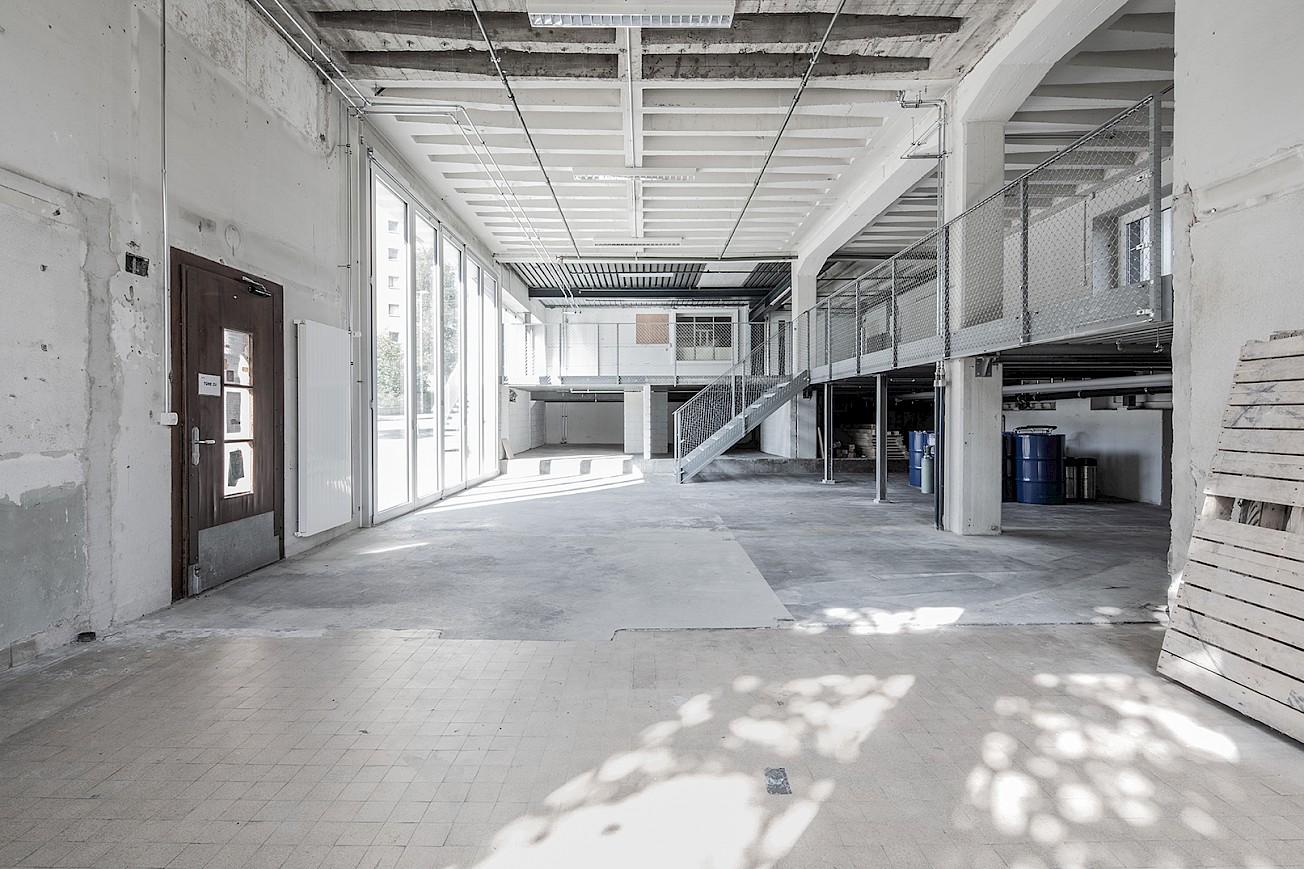 While the working spaces were quickly filled, there was still a “problem room” left: a 168m2 and 4.4 m high space of possibilities. My friend Christian Krebs who in the past has created the very successful music venue bee-flat invited me to join the association of dreamers and start envision what this place could become: a unique place at the interface between art and society. A venue where cultural projects can arise without pressure, where artists can deepen, develop and perform their work and interact with the audience. A new meeting point at the outskirts of Bern.

Brimming with ideas we founded an association and named our baby “PROZESS”. Then we had to face the cold facts. How is lighting done without electricity? Where does the audience sit without chairs? Where is beer served without a bar? The list of necessary purchases soon got bigger than our vigor. We needed money. To be precise: 150’000 CHF. What now?

We asked for contribution from the city of Bern and the Burgergemeinde, a key organization for the cultural landscape of Bern. But we needed still more funds. And we wanted to prove that our idea was financially viable beyond the support of public funds. Thus, came the idea to start a crowdfunding campaign and raise 35’000 CHF. Crowdfunding is a method of raising capital through the collective effort of a large pool of individuals, typically via social media. The great side benefit of crowdfunding is that you also expand your network and generate future audiences.

Remark: While every crowdfunding site has its own unique features, platform fee and overall fee structure, the core concept is the same: you submit your project to the platform with a fundraising goal and a deadline and then campaign for support online.

Whether you’re raising money for a new aquarium or solving the pollution of the seas, if you can’t explain what it is or why people should support your campaign, it’ll fall flat on its face and you’ll likely lose money. Bare information and calls to action is rarely enough to get people to contribute. It requires empathy. And only a good story and the faces behind the project will appeal to your donors’ emotional side. Nothing is more suitable for this than a short video. No worry, there is no need to be too professional about it. Be as personal as possible, and at some wit to it.

It is important to provide your backers with a clear understanding of what your project is, what problem it solves and why they should care. Try to be simple, specific, and memorable.

At PROZESS I am in charge of the communication and thus for the crowdfunding campaign. But I was very glad that Anna Bürgi volunteered to help me with the campaign. She is an expert on public fundraising and works for the Krebsliga Switzerland. Her insights were invaluable.

Together we planned our communication strategy. Be prepared to expose yourself more than you would like to. Mailing and social media is the biotope of your campaign. Facebook was our social media channel. Email newsletters and personal SMS were sent to our family and friends to reach those outside Facebook. Finally we distributed flyers in the city. The flyers had a QR code that took the reader directly to our crowdfunding page. It’s important to focus your communication on one action to be taken by the public: give us money! Every message needs to end with a direct link to the donation option. Be prepared to feel intrusive and ridiculous.

Planning and structure, or: How long can you stand this?

You will find out that the campaign is not done with registering your project on the platform and uploading a video. Now the real work starts. (And never could I have imagined how exhausting it would be!) Be prepared to spend more hours than you planned. On WeMakeIt you  decide on how many weeks you want to run your campaign: longer campaigns mean you spent more days working on it. Shorter ones mean you will work every day more intensively. We decided on a rather short period: 6 weeks – and structured this period like a three-act-play. (life is a movie, isn’t it?)

Act I (week 1&2):  Introducing the campaign with a BAAANG and posing on social media every 2 days. Writing a mail to all friends and family (making sure that even grandma gets it!)

Act 2: (week 3&4): Calming down and communicate every 3-4 days. We planned some events for people to see the place and let them know that we mean it. Placing flyers in the city, keeping flyers in our bags to hand out when going out for a beer.

Act 3 (week 5/6): Tighten the tension. Throwing at it all you have. Communicating every day. Organizing more events for people to see the place. Writing messages to your friends again and again and again till they hate you. :-)

Your supporters should be thanked for their contributions. Let there be a gift for every budget. Be creative. Thinking of incentives can be a lot of fun. To make our contributors smile when choosing their goodie, our list included some daring ideas for daring contributions:

·      The balloon excess: We fill the whole room with balloons. Armed with a needle, you can then pierce your way through the sea of balloons.

·      Black out: For a large contribution you have the right to pull the electricity plug at an event of your choice in the middle of the performance. Your commitment - after the lights are back on - will be acknowledged with your name, stage appearance and applause.

More is more - Enlarge your audience

To multiply our outreach, we asked prominent people to cross post our posts on their social media channels. This way you reach people you would have never reached. We asked the artists that came to our place for a short gig or performance during the campaign to let their audience know about our campaign. 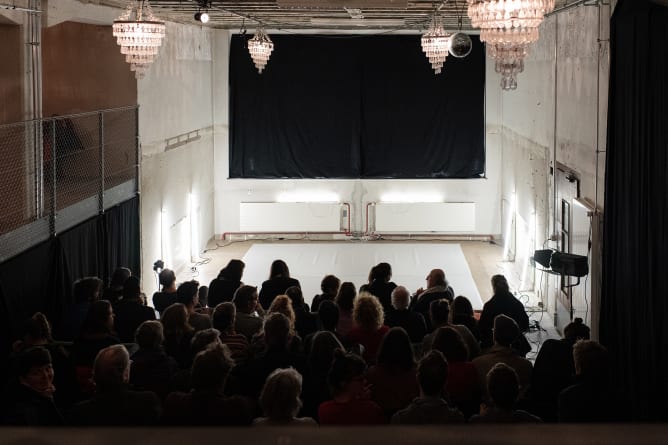 Be prepared to believe you will never make it. After the first act we raised 8000 CHF, in just the first 5 days. Amazing!But then nothing moved. Midway through we have not even collected half of our financial goal. Did I already mention that many crowdfunding platforms apply the “all or nothing” principle? Your project must reach at least 100% of the funding target, otherwise the money will go back to the supporters.

At the end of week 4 we passed the 50%. Two weeks left to get 17’000!!! The first thing I did every morning was to look at the level of contributions we have received during the night. (Is this me who spends minimal time on Facebook?) Most mornings nothing has changed to the previous day. We were posting like crazy, writing mails to anybody we know.

Three days to go… That morning I checked and we were still missing 5’000 CHF.

On my bike to my office I was mulling over what could be done… I was nervous… Are we to fail? I arrived to my bureau nervously checking the contributions again… We…

I couldn’t believe it! The stress of the past weeks fell from me. That day I just couldn’t concentrate on anything. I felt like celebrating. And though we had 3 more days to go, we decided to throw a celebration party and invite everyone to our future cultural space.

Would I do another crowdfunding campaign ever again? Go through such an emotional roller coaster again? Never! But today looking back, I don’t know. Sometimes ideas come to you that just want to be realized. You can’t fight that feeling, you just need to go ahead and throw everything at it. If you find yourself in this position and would like to know more how to go about it, feel free to ask me for advice and moral support.